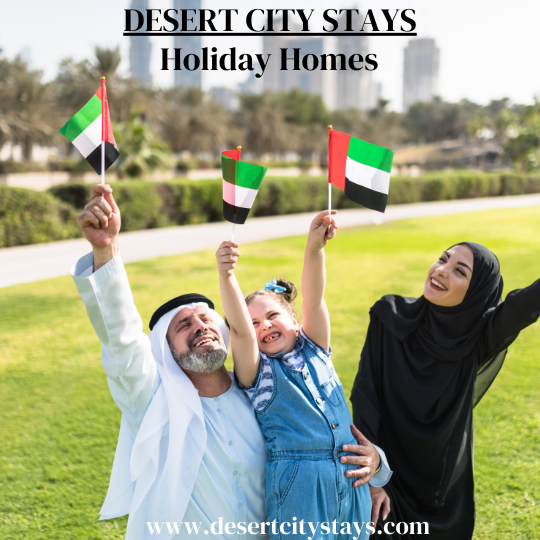 UAE National Day (Arabic: "Al Yawm Al Watani") is celebrated on 2 December every year in the United Arab Emirates. Ras Al Khaimah was the 7th Emirate which was added to the federation on 10 February 1972.

The UAE National Day stands for the freedom from the British Treaties, which were declared in 1968. Sheikh Zayed bin Sultan Al Nahyan was the first president of UAE.

National Day is celebrated with orchestra, light display show, a violinist and a harpist playing popular Emirati songs on that day.

Grand celebrations are held across the UAE to make this occassion special.  Pyrotechniques, Car rally and dance shows are the most common activities. People will dress up in UAE national flag colours and hold balloons with UAE flag on them. People also decorate their homes, offices, cars and streets to celebrate the day. Palm trees are decorated with lights from the colours of the flag. Hotels and Malls are decorated with flags and colourful lights.

Next to Dubai Mall - Burj Khalifa displays the UAE flag along with pyrotechnique show. It is crowded with people seeking to see the massive national day celebration.

Holidays are given from the National Day until two days later. Air shows are conducted while military vehicles move forward in an orderly manner at Abu Dhabi National Exhibition Center for the rulers of the Emirates, members of the Federal National Council, and Emirati citizens.

We at desertcitystays strive to provide the best service for our landlords and our guests. No demand is to much or problem unsolvable at DesertCityStays

Thoughtful thoughts to your inbox

Refer a homeowner to use our service and receive AED 1,000